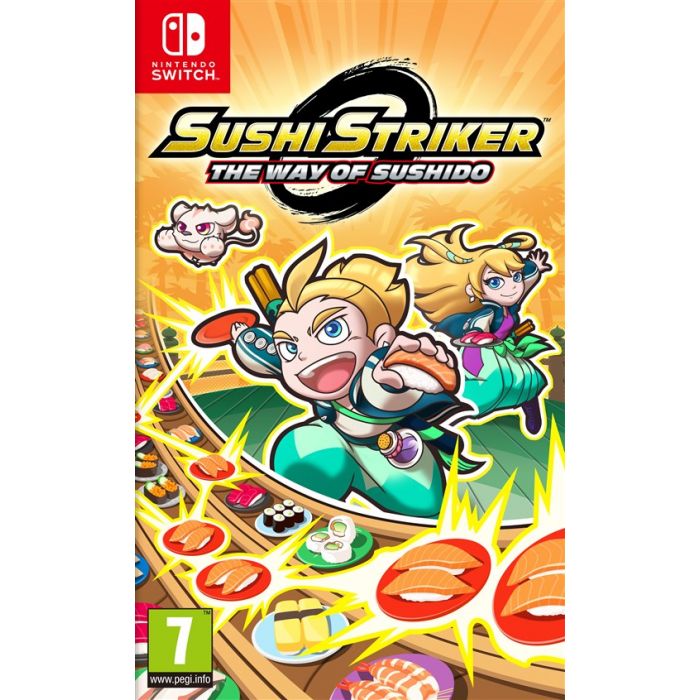 Preskoči na začetek galerije slik
Opis
Win the ultimate food fight in Sushi Striker: The Way of Sushido on Nintendo Switch! In this quick-fire action-puzzle game, match coloured plates and types of sushi to build powerful attacks to hurl at the enemy.

Eat to defeat!
Take on the role of Musashi, a young hero with an above average appetite! Unearth the mystery behind Musashi’s missing parents and the infamous Sushi Struggles, and defend your homeland from the invading Empire so that everybody can enjoy sushi in peace once again. Be wary though, young warrior, for there are plenty of superior sushi samurai on the horizon. You’ll need to be at your tip-top best – as well as possess a hunger for success – to reign sushi supreme!

At the start of your adventure, you choose whether Musashi is a boy or a girl.

Food for thought
Take more than just a large appetite into battle. In Sushi Striker: The Way of Sushido, you’ll find and befriend many sushi spirits known as Sushi Sprites. Bring up to three of them with you and use their powers to gain the advantage. You’ll also unlock plenty of goodies to spice up your sushi showdowns with loads of customisation options!

More to chew on
Feeling competitive? Play against friends or those in your region* and show off your sushi striking strategies and abilities, or face-off against a highly skilled robot if you’d rather train alone. You can even attempt each story mode battle’s additional challenges to really test your mettle!